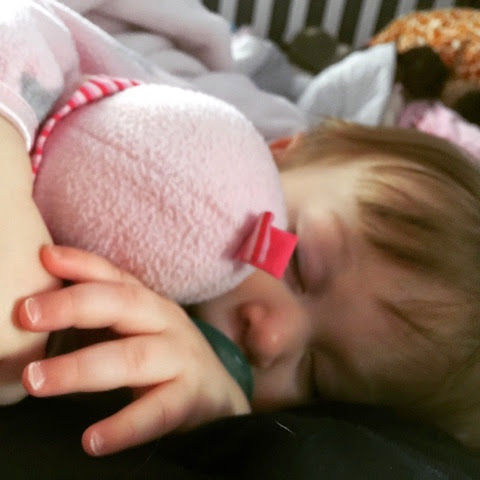 I was going to have my lovely husband write this post and then I realized that I would be doing you all a disservice by not admitting to the fact that at 2.5 years old, Gabby is still not a good sleeper.

What would be more useful is the tale of how I screwed up her ability to sleep forever and what I have learned along the way. If it makes you feel better, Lillian is a fabulous sleeper, so if you screw up like I did, just try again with your second kid. The best thing about subsequent children is the ability to see you are not a failure of a parent, you just didn’t know what you were doing as a new parent.
Anywho…
Because I was home with Gabby full-time for 7 months, I never put her on a schedule. I had no idea how, I tried a few times to just impose one out of nowhere and repeatedly failed. For a type A person, I am not good with routines. When I finally got a job after graduate school and Gabby started daycare, I begged them to help me get her on a schedule. At this point (I hate to admit), she napped sporadically and slept in our bed every night. She had never spent one night in her crib. BIG MISTAKE.
Daycare got her on a good schedule but the pediatrician and my co-workers looked at me sideways when I said she still nursed all night at 9 months old. The doctor said there was no biological reason for her to nurse all night and since she was starting to crawl it was pretty unsafe to have her in our bed, so we did some reading on sleep training.
We decided we would try a gentle approach where we would go in to soothe her at ever-elongating increments until she got over it. I lasted about two days before the hubs took over and I drowned out the sound by locking myself in the downstairs bathroom until she stopped. It took about 4 days and we were all good.
For a few months. Every few months ever since we have had to repeat the process. She does now sleep 12 hours at night but by 12 months, she was only napping sporadically and now she doesn’t nap at all on non-daycare days (because she hates me).
So what have I learned? I started letting Lillian sleep in her crib at night starting around 3 months old. Newborns sleep better on their stomachs (which is why they love to ball up on your chest), so I put her to sleep on her tummy and flipped her over onto her back after a little while. I learned Lilly’s natural sleep schedule and then reinforced it. I learned to put her to bed when she was tired, which was for a long time 6pm. It was sad for me to come home from work and put her straight to bed, but we are now reaping the benefits. She is a great sleeper.
The moral of the story? Do what works for you and your family. Everybody screws up. And if you screw up as bad as I did, you can always try again by having another kid!

One thought on “Sleep Training… My White Whale”